In recent weeks, I spent a lot of time getting into the vibrant macrocosm of traditional Japanese surface game, and I really got hooked by this exotic and multifaceted field. Since then putting together the perfect ingredients for a classy topwater combo is on top of my to-do-list for the coming season. But to be honest – it’s a more complex task than I initially thought.

When compiling rod & reel setups in the past, I was able to consult the known ressources, such as forums and manufacturer websites and there was hardly a rod or reel that wasn’t reviewed or featured already somewhere. Besides of that, own experiences and knowledge of taper ratings, blank characteristics and other tackle components qualities made it easy to judge wether a particular piece of tackle suits a specific field or not.
In this particular case there where nearly no informations available besides of cryptic japanese blogs and a hadful of mostly outdated maker websites, so most of my “instruments” where failing right from the beginning.

Even if an appropriate rod blank was quickly found due to helpful recommendations and guidance from friends in Japan, the forming of a unified and well belanced composition of rod, grip and reel was still a good way off. One of the toughest tasks was to step back a step and get rid of all too conventional thinking about tackle in general. Japanese surface game is a field rich in tradition and anticipation of early custom tackle and handmade lures that goes back to the end of 19th century and beyond. But there’s way more than just the traditional background.

After browsing through countless blogs, manufacturer websites + online shops and enjoying plenty of topwater related video footage on YouTube and other online video platforms, it feels like SUIMEN (水面 – japanese kanji for surface) represents an apparently different approach to bass fishing in general.
It’s not about following the faster – harder – better approach of well known and high technologized japanese tackle giants, but more about design & style, a close connection to nature and environment and obviously about having fun. Keeping in mind the impressive amount of 50up lunkers I saw at online galleries in recent weeks, it doesn’t seem to be a less effective approach either. I’m aware the above ramblings might sound a bit cryptic to some of you, but I’m sure you get the point.

Back on topic!
For now we already have a sweet handcrafted 1oz topwater stick and a vague idea of the grip to complement the rod setup. Initially I was thinking about using my 101DC reel for the upcoming topwater combo, but just after a few days I had to realize that nearly none of the available grip types and models are made to fit latest Shimano reels.

I was aware that vintage reels where quite popular for topwater fishing, but thought about giving things an own spin again and of course about saving a few bucks. After studying all possibilities I ended up with two options: 1st – to continue searching for a grip that fits the 101DC (most unlikely, as I was looking for a particular design) or to follow the original way of things and go for a vintage round profile. But even this 2nd option turned out to be more difficult than expected. Most available models where right-hands and I only found a handful of already discontinued reels by Abu Garcia and other manufacturers offering left-hand versions. 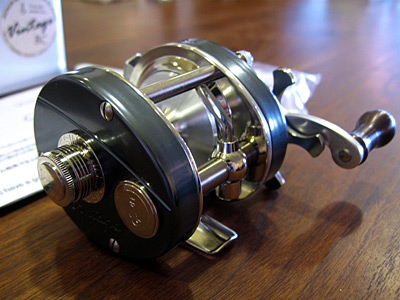 After doing some more research, I stumbeled upon Isuzu’s vintage reels and instantly felt in love with their BC731SSS series. I really love the uinique american egg-shape design and the reel’s specifications seem to fit the proposed field of application quite well. In Japan Isuzu is known for their fly fishing reels but also for a compelling catalogue of vintage reels and the perfect finishing and highly unique design of their products instantly caught my eye. 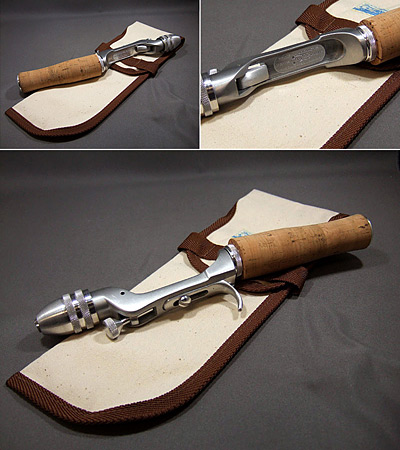 Now that the reel part was resolved I went back focussing on the grip choice and one of my early favourites felt within reach again. Frog Product‘s 2008 Toy’s grip was leading the list of most likely candidates since the beginning, but wouldn’t fit one of the reels I already had in my arsenal.

I’m really excited that slowly but surely all ingeredients are coming together and I already got confirmation from Japan that both components are available. I’m quite curious to see how all three parts ‘ll fit together and looking forward to first field tests in southern Spain at the end of March / begin of April.

I hope this lengthy blogging offered a brief glimpse at whats been going on behind the scenes in recent weeks and offers some more insights into the world of Japanese surface game. To be continued…