Todays blog post is not about wearing big and bold jewelry, but about another overseas sending that arrived in Berlin yesterday, containing some fine pieces of topwater tackle and a true masterpiece of Japanese craftsmanship.

I wasn’t expecting much response, when I sent out a first email to Brightliver (ブライトリバー) a bit more than a week ago. Not because I’m pessimistic by nature or some sort of gloomster, but after a handful of unsuccessful attempts to get in touch with people from Japans vibrant Topwater scene, I had little hope.

All the more surprising was the instant response from Kazuyoshi Matsumoto – creative head behind Osaka based Brightliver Tackle Co. With a few, yet kind words he confirmed my order – containing some lines, line-tubes and hooks – and sent an invoice. 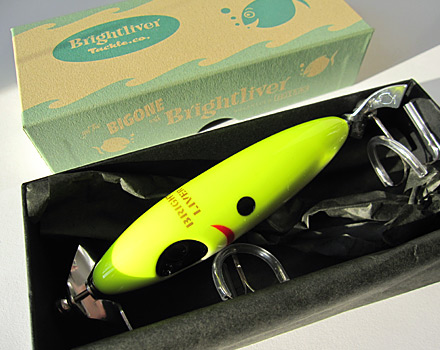 Yesterday right after breakfast, the postman delivered the sending, which truly sets new benchmarks in terms of shipping times. In less than 4 days the package covered the distance of 8844 kilometers from Osaka to Berlin and is therefore the quickest delivery I got from Japan in recent years!

All the more surprising was the content of the box. Besides the items I ordered, I found one of Brightliver‘s just released handmade plugs – the “Larry Chopper” accompanied by the “Brightest River” DVD featuring Mr. Matsumoto himself.

At the risk of repeating myself I have to admit, that I’m still overwhelmed by the response I got within the last week. That might have something to do with Brightliver’s and Tsunami Lures’ offices being located at the same place in Osaka and both being friends, but more with an open-minded and almost cosmopolitan attitude that is truly hard to find these days.

Thanks again, for the kind support. ども ありがとう。

More pictures and detail shots of the package’s content: 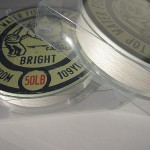 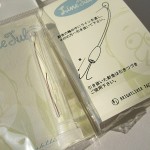 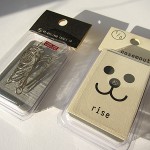 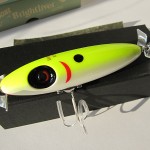 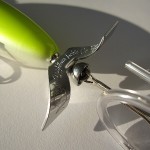 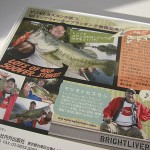 2 thoughts on “The Brighter, The Better”

Quick update from the workshop and some detail shots of latest designs
Apr 1st, 2016Inspiration

Nagoya sightseeing – including a workshop tour and visit to Boaster Cafe