It’s official.. In less than four weeks I’m going to have my first ever kayak adventure!

Today I got positive response from Granada, Spain. Beyond some minor language barriers, I had a pleasant talk to Iñaki from Salta Rios this afternoon. After just a few minutes exchanging details and talking about my needs, we agreed about the rent of a Tarpon 100 Pesca (Angler edition) in Ferrari red and I’m really happy about this kind offer. 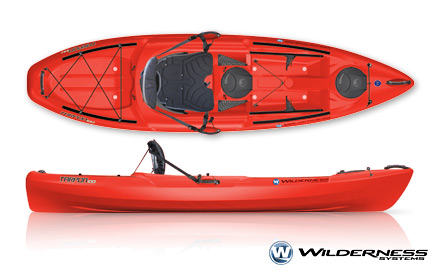 Those of you who are following this blog regularly, already know about the kayak research I did back in February. Since then I was trying to get in touch with kayak shops down there in Andalusia and thanks to Salta Rios, the search is finally over.

Kayak fishing is becoming more and more popular amongst topwater anglers in Japan and I’m curious to give it a try during my trip to Spain. To get a better idea about topwater angling from a small and versatile sit-on-top kayak, I recommend watching the following clip on YouTube:

Slow but steady all the details and ingredients for the upcoming trip are coming together and it’s going to become a special and memorable one, thats for sure. Stay tuned!