I’m traveling Andalusia for eight years now and no, it’s not getting boring yet. I haven’t been out on the water since months and kayaking Navallana (one of my favorite places) on the first day was an easy choice. Especially in April this reservoir is an exciting place for topwater angling. Big bass are quite active and can be found in shallow areas and close to structure and sunken trees. The water level was much lower than in previous years because of the missing rain during previous months and the scenery reminded me to my first visit to this reservoir where we experienced similar conditions. It’s a huge advantage to always travel around the same season and knowing the interesting spots and characteristics of a reservoir.

The trip started in promising fashion with a good fish at one of the first stops close to a steep rock formation. Lure of choice: NuwMouse KF22 by Budd & Joey in the compelling YGF color pattern.

With a bright smile I approached the next bay and just within minutes I missed out on another soft bite. The follow-up led to a stunning fight in shallow grounds packed with drift wood. The power and persistence of this fish caused an instant adrenaline rush and there she was… 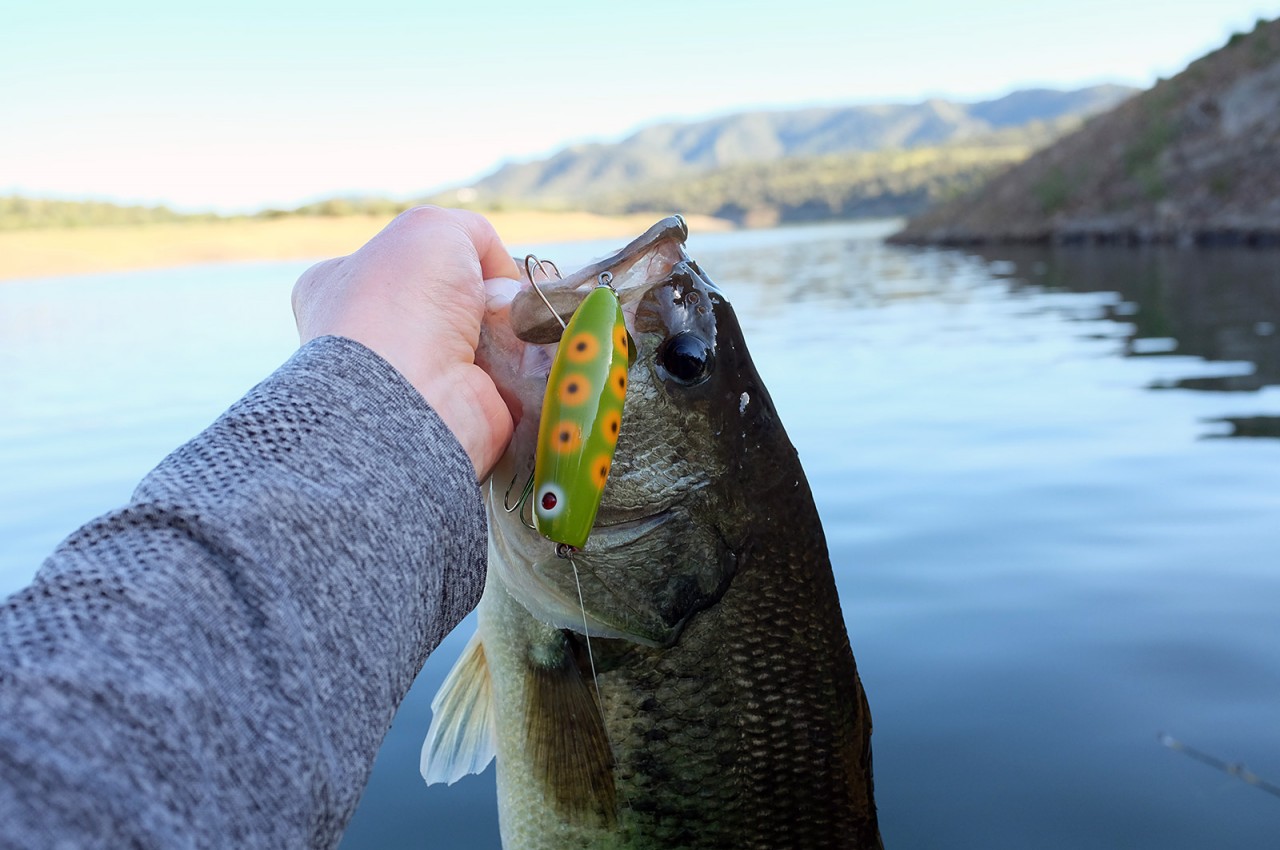 A Beauty of close to fifty centimeters with the shape of a football. The day couldn’t have started off more perfectly!

I was still shaky from the excitement and adrenalin, but soon I had posed the fish for photos, and after this was done, I continued exploring Navallana in upstream direction. During the next three to four hours I didn’t had a single bite and it felt like I already used up all my luck for the day…

The wind had freshen up slightly since morning and I decided to fish a few smaller bays on the opposing side of the reservoir while waiting for fellow friend Enrique to join me for the remainder of the day. It was good seeing him again and after enjoying a delicious lunch with Jamon Iberico, cheese and cold beer we continued fishing together.
Within minutes we had a few first bites and both caught a fish in quick succession. While Enrique was using a “Cosmo del Plastico” by Tsunami Lures I switched to my new OneNac (Anydope) in the high-appeal TS color pattern.

Within the next few hours we split ways for a while and Enrique was heading upstream, while I continued fishing shallow bays – slowly returning to our starting point. With literally one of the last casts of the day, I caught another good bass using my brand-new Cygnet by Kanagawa-based lure builder Lamia.

It’s a fantastic and nicely crafted lure and getting a fine fish at first use was simply fantastic. Shortly after, we quit fishing and I felt every bone in my upper body after spending more than eight hours on the water…

River fishing on a hot summer day followed by a fun night out in Nagoya city
Mar 26th, 2016Inspiration

Stunning and highly creative interpretation of a classic original